WHAT IS THE DREIDEL ?

A dreidel is a spinning top having four sides, each marked with a Hebrew letter, normally played by the Jews on their holiday, Hanukkah. The four letters that appear on the spinning top are nun, gimel, hey, and shin. These letters are the acronym of a group of Hebrew words, which, when combined, translates to “a great miracle happened there.” Although it is a game usually played by the Jews, you can still enjoy this game with your friends for a laid back weekend. 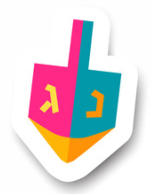 The most common explanation given to this game takes us back to the times of Chanukah and the Hellenistic conquest. At that time, the Greeks expressly forbade the study of Torah, but children continued to hide in the woods in order to study. It is thought that the dreidel emerged as a way of covering up this action; when a Greek approached the forest, children would hide the Hebrew texts, take out the pyrinolas and pretend to gather to play. Some people say that's why we played with the pyrinoles on Chanukah. However, both Kabbalists and other sages allude to a much deeper meaning.

WHAT DOES IT REPRESENT ?

The dreidel is a symbol of how God is manifested in the world through miracles. Just as the movement of the dreidel depends on a central force that energizes it both from above and below, and from the center outward. The world also depends on the energy that comes down from God and stays in the center of Creation and is the genesis of life and movement. Just as the pyrinola falls and begins to wobble when it loses its balance at the central point, man is lost when he moves away from his relationship with God and spirituality. Likewise, the force that gives movement to it is not clear and evident once it is already spinning, just as the hand of God manifests itself in natural events.

Furthermore, what essentially distinguishes a dreidel from any other pyrinola are the four Hebrew letters written on each of its sides. The letters (nun, guimel, hey and shin) are the acronym for "Nes Gadol Haya Sham" which means "The great miracle happened there." It can refer both to the miracle of Chanukah, and to the many miracles it performed daily in our world. Also, according to the Kabbalists, the letters represent each of the exiles that the Jewish people have experienced and that were seen by Daniel in a vision.

The "nun" is the first letter of the word "nefesh" soul, referring to the Babylonian exile. In this exile was the first time that the Great Temple was destroyed and we were taken out of our land, the attack was primarily on our spirit, our soul. The next letter "guimel" forms the word "gof" which means body refers to the Persian exile when Haman and Ahasuerus tried to annihilate all the Jews of Persia; the attack was on our body, they sought to annihilate us physically. The "shin" is the first letter of the word "sejel", thought or understanding, unlike the Assyrians or Romans the Greeks did not seek to kill the Jews, however they wanted to push them to assimilate, they wanted to ban their philosophy and way of life, the attack was primarily on thought and tradition. While the "hey" is the first letter of "hacol" "everything" refers to the Roman exile that attacked everything we are, both in body, mind and soul.

Finally, the real miracle we celebrate is that after so many millennia of attacks on the Jewish people, they are still in existence. We celebrate that thousands of Jews throughout the centuries have decided to listen to the voice of God, to preserve the Torah and to pass on to their children the tradition of their fathers. With all the pressure in the world to abandon our tradition, it is a miracle that the Jewish people still exist.

HOW IT CONNECTS TO MIRACLES OF CHANUKAH?

What would happen if I told you that every day we witness a daily miracle? What's more, would you believe me if I added that it's not just one, but ten, twenty, maybe thousands or millions? Maybe, though, many people would take me for a fool or believe that I have the wrong definition of a miracle. In this day and age, we have become accustomed to thinking of miracles as something completely removed from our world; that they can happen only once, if at all, and they happen only to people who are too extraordinary and too far away from us. However, that is a misperception of what a miracle is.

A miracle is the manifestation of God in the world and can occur through supernatural elements, such as the events of the plagues, the Sun in the battle with Joshua or the parting of the Red Sea with Moses, or through natural events, such as all the physical laws that govern the world, man-made charity and a mother's love for her child. Each of these events are signs of the Divine Presence in our world. The first ones teach us that everything that exists is handled by God, that He created the physical laws, logic, matter and this world; therefore I can change and modify it when necessary (1).

The latter show God in a more discreet way; they are events whose beauty and order make them extraordinary even though they happen in the daily sphere. They are also events that are not well explained under a rigorous logic of cause and effect but require a deeper insight. They interfere with an order, the work of a superior being.

These two ways of looking at miracles are presented at Chanukah. On the one hand, the miracle of the oil was a supernatural event, God extended the natural time in which it was to burn so that it would last longer and the Temple could be properly sanctified. However, it is a discreet miracle that occurred in privacy and with detail, it was not as splendid as the Plagues. The same thing happened with all the miracles that God did to the Jews during the war with the Maccabees, there was divine intervention, however, this was manifested through the victories obtained through an apparently natural means; through the actions of man

That is why Chanukah sends a very strong message to all of us, teaching us to see God in the world around us and to seek Him at the center of all the events that happen to us every day. This meaning is represented in one of the most common Chanukah traditions, in the game of the "dreidel" or the Jewish pyrinola.

1) The miracles mentioned are a sign of the power of the Godhead, however, this does not mean that God acts in a capricious or random way in this world. Each one of them happened within a certain context and was a specific and necessary message for humanity. They were revelations of the Divine Presence and Omnipotence